And now for some fun stuff…Panaseeya! 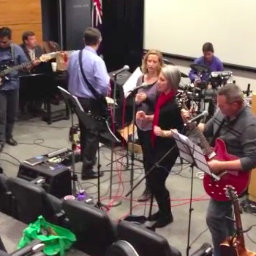 It’s not all doom and gloom right now. Although my writing is currently on hold, I have been doing some creating. I’ve joined with six of my classmates from college to form a band, which we’ve called Panaseeya. The course we’re doing is on strategic studies and the band name is tongue-in-cheek, as some people would like there to be a panacea for all national and international conflict. The band has so far played only one gig, but our second is planned for 24 August in Canberra, where we’ll be playing two sets. Our band is incredibly diverse: we have five guys and two girls, we have band members from Australia, Germany and Brunei, we play rock and pop and we have a great range of instruments, including sax and bagpipes!!

This entry was posted in Fun stuff and tagged exhumed, panaseeya, triple J. Bookmark the permalink.

1 Response to And now for some fun stuff…Panaseeya!